Step on board the cruise ships calling into Bergen with these full interior photo tours. Take a look around their public rooms, cabins and open decks as they really are, without a filter, airbrush or wide-angle lens in sight.

I recently put together this three-part photo tour and voyage report of an eastbound transatlantic crossing on board Cunard's beautiful flagship Queen Mary 2. The trip was a great experience, and I hope the photos give a good impression of how nice this ship really is!

The above tour was completed during a visit on board Stavangerfjord. As these two sister ships are identical, down to the interior styling, this functions as a one-size-fits-all tour for both.

Hurtigruten's fleet of ships operate daily departures from Bergen year-round on the stunning coastal express route, which cuts through staggering scenery as it calls into 34 ports along the Norwegian coastline. With beautiful and comfortable ships ranging from the classic MS Lofoten to modern vessels such as MS Trollfjord, Hurtigruten is keeping alive a tradition which stretches back well into the 19th century.

Hurtigruten also operates a dedicated expedition cruise ship, Fram, which I hope to feature when she returns to Bergen after her winter season overseas.

Aimed exclusively at the over-50s market, Saga is a successful British cruise line, gaining in popularity with their current fleet of two tastefully refurbished ships.

In have also visited Saga Sapphire, and will be posting the full photo tour soon.

Before the news in January 2017 that Voyages of Discovery would cease operations (due to the bankruptcy of parent company All Leisure Group Ltd), we took a look around MV Voyager in Bergen. Hopefully she will find a new lease of life with a new owner. 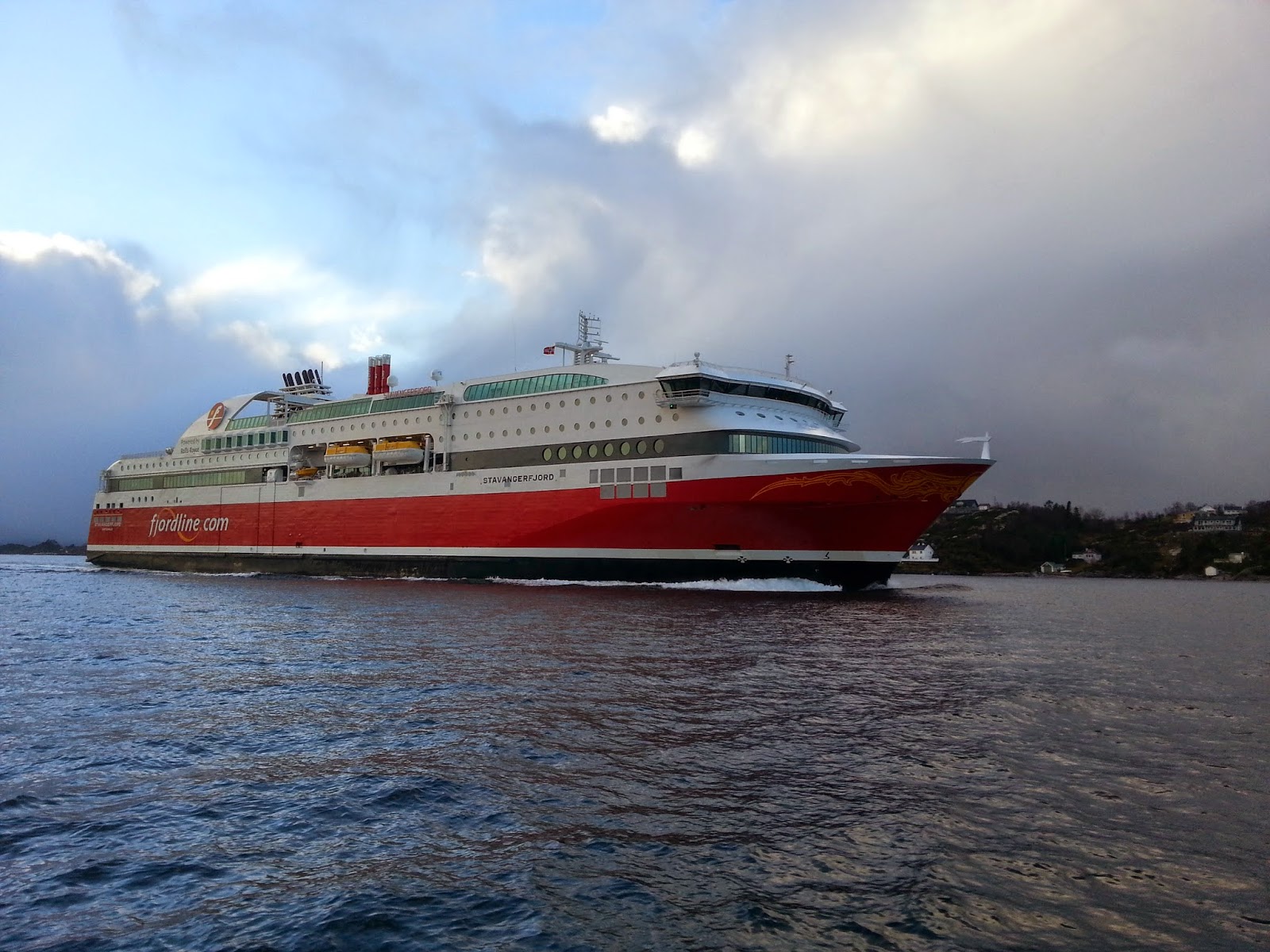 Last week I went on board Fjordline's cruise-ferry Stavangerfjord, for a whistle stop tour of her passenger facilities during her impressively fast turnaround in the city. MS Stavangerfjord approaches Bergen, Norway To find out a bit more about her design, construction and service, take a look at my previous post here , with photos of Stavangerfjord approaching Bergen taken last December. Otherwise, keep reading to have a look around her public rooms, cabins and suites... A plan of Deck 7, showing the layout of Stavangerfjord's public spaces (credit: fjordline.com) With a few exceptions, Deck 7 contains all of Stavangerfjords public spaces. The gangway leads directly to the middle of this deck, adjacent to the reception desk. First impressions are good, with an attractive entrance area and smiling staff to welcome you on board. The Reception Desk Directly opposite the reception desk is Bungalow Wine & Tapas Bar, with the fresh food on display making t
Read more 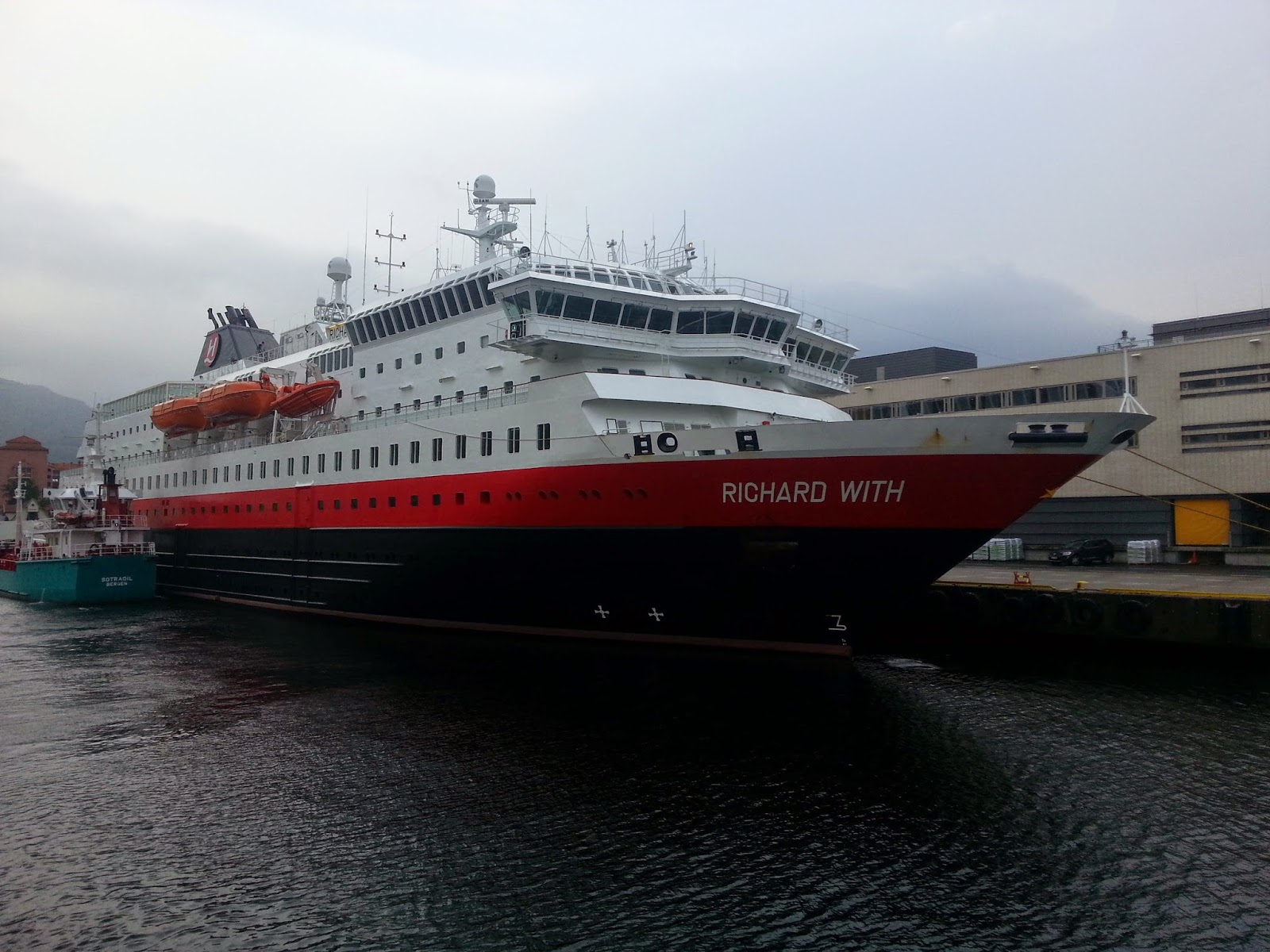 Next in line in our series of photo tours on board the ships of Hurtigruten is MS Richard With. Hurtigruten's fleet of cruise ships operates daily departures on the 11-day round trip from Bergen, calling at 34 ports along the coast of Norway. The route is popular with cruise tourists keen to experience 'the most beautiful voyage in the world', and also serves as a lifeline for many smaller communities in Norway's more isolated north. Scroll down to see our full photo tour of her passenger decks. Hurtigruten's Richard With alongside in Bergen, Norway Named after the Captain who founded Hurtigruten in 1893, MS Richard With entered the fleet 100 years after the opening of the coastal express route. Richard With Built in Germany in 1993, she has a tonnage of 11,305 and can carry up to 623 passengers (464 in berths). She is one of the six '90s' ships in the Hurtigruten fleet; a group of near-sister ships with similar designs and pas
Read more 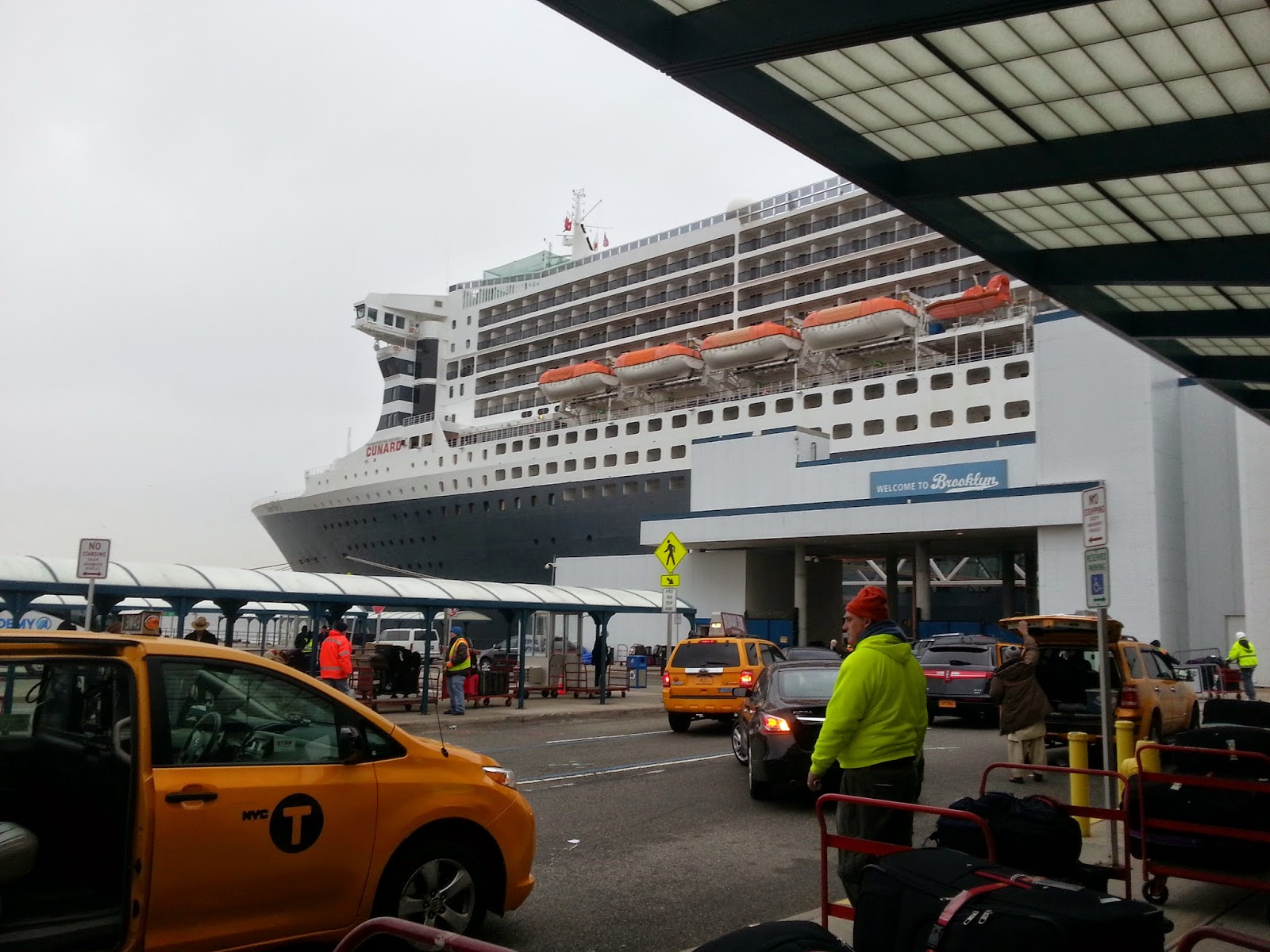 Earlier in January we boarded Cunard's flagship Queen Mary 2 in New York to make the transatlantic crossing to Southampton. This is something I have long wanted to do, and the experience certainly didn't disappoint. I had originally intended to complete a comprehensive photo tour of her passenger decks. Unfortunately, during the crossing, time slipped away (with more than one late night to blame) so I am left with the following photos which I took as I made my way around the ship throughout our 7 days on board. I hope they still give a good overall impression of her public spaces. Queen Mary 2 alongside at Brooklyn cruise terminal We boarded QM2 in Brooklyn. Getting a taxi to the port was quick and easy, and we were on board around 30 minutes after arriving at the terminal. Ready for boarding - Glass gangways lead to the ship Happily our cabins were ready immediately, so we headed straight for our sheltered balcony cabin on deck 4 to drop off our hand luggag
Read more

I'm a Naval Architect and Yacht Designer (coasedesign.com) based in Bergen, and a life-long cruise ship and ocean liner enthusiast. I take a huge amount of pleasure in running this blog; both by getting out and about in town to photograph the ships, and then sharing my photos with you here.
Each year around 300 cruise ship calls bring some 500,000 passengers to Bergen. Follow this blog to keep up to date with the latest photos and interior tours, and read about the histories of the ships visiting this beautiful city.
Take a look around, and enjoy!